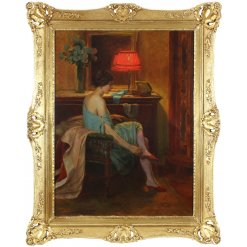 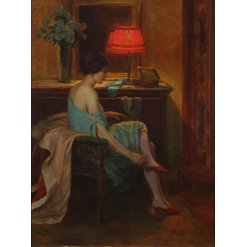 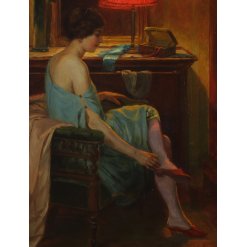 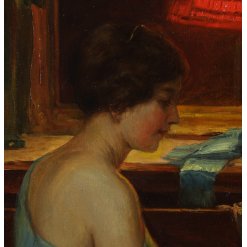 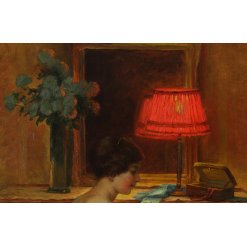 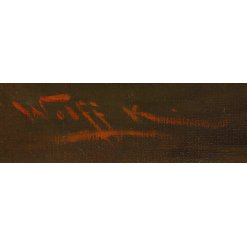 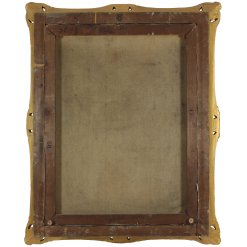 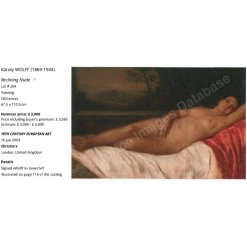 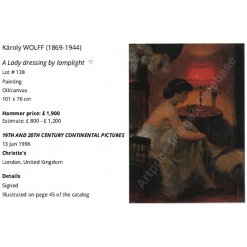 A fine oil on canvas impressionist painting by the Hungarian artist Wolff Károly (1869 – 1944) depicting a seated young woman in a salon.

Condition:  Painting and frame are both in good condition, with just a few scattered spots of re-touching visible under a blacklight.

Biography:  Wolff Károly (1869 – 1944) began his art studies in Budapest, where between 1901 and 1905 he studied at the Master School of Budapest (Képzomuvészeti Akadémia) led by Gyula Benczúr, and then he continued his studies at the Academy of Fine Arts in Munich, where he studied with Gabriel Hackl and Wilheim Diez.

In 1911 he received the Marcell Nemes Prize, and in 1913 he also won the Award of the Erzsébetváros Casino. Since 1902 he has regularly exhibited his pictures in the group exhibitions of the Art Gallery.

In 1936 he underwent unsuccessful surgery, which left him paralyzed on both legs and forced him to paint while sitting.

His pictures are mainly illustrations, portraits, mythological and religious images. Many of his paintings are preserved in the Hungarian National Gallery.