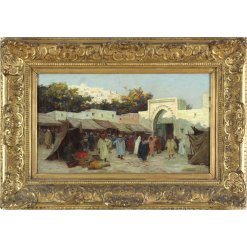 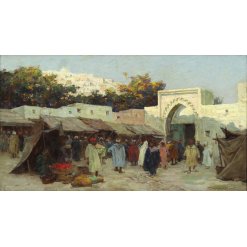 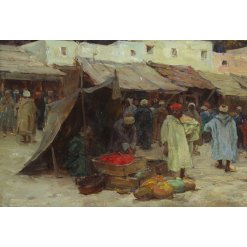 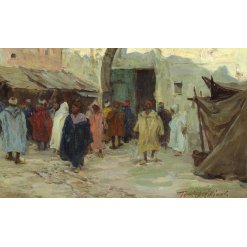 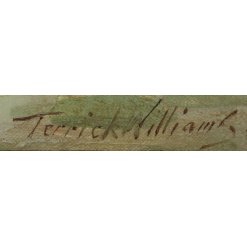 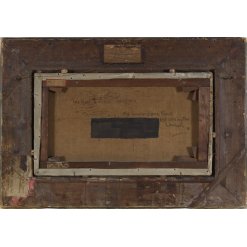 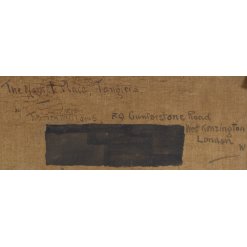 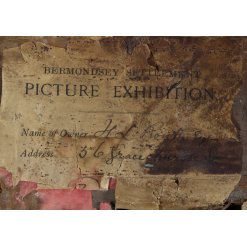 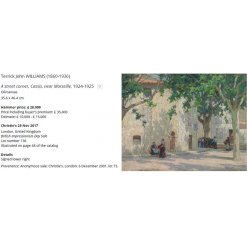 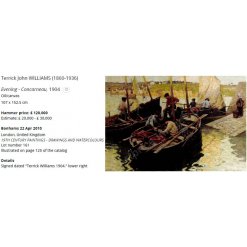 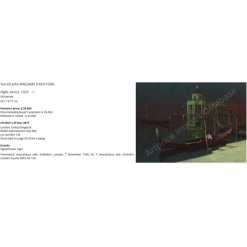 A fine oil on canvas painting by the English painter Terrick John Williams (1860-1936) of a market place in Tangiers, Morocco.

Signature:  Lower right, and also inscribed on reverse of canvas.

Condition:  Painting and frame are both in good condition. There is some minor re-touching visible on the lower edge under a blacklight, and there are some minor plaster losses from the frame.

Biography:  John Terrick Williams RA RI ROI (20 July 1860 – 20 July 1936), better known as Terrick Williams was a British painter who was a member of the Royal Academy. During his lifetime, Williams became one of the most successful painters in London.

Williams was born in Liverpool, England, the son of a businessman. He was educated at King’s College School, Wimbledon, London and was expected by his father to continue in the family business. However, his determination to become an artist saw him abandon his business career and move to Europe in 1885 and study under Charles Verlat in Antwerp and later at the Académie Julian and Jean-Joseph Benjamin-Constant, William-Adolphe Bouguereau and Tony Robert-Fleury in Paris.

After his student days in Paris, he moved to St. Ives in 1890 where he lived, between there and his London home in West Kensington, until his death. Williams was a medallist at the Paris Salon in 1908 (3rd class), and 1911 (2nd class), and also won a 2nd class medal in Barcelona of the same year. He exhibited, not only in Europe, but also at the Carnegie Institute in Philadelphia.

Williams focussed on landscape and marine subjects and painted in oil, pastel and watercolour. He travelled extensively and his impressionistic, luminous paintings sought the transient effects of light and reflections in Venice, St. Tropez, Paris, Brittany and St. Ives.

He died at the Joe Park Nursing Home in Plymouth on his birthday in 1936. After his death a memorial exhibition was held at the Fine Art Society in 1937. Thirty-three of his works are in public collections in the UK.