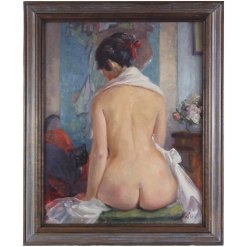 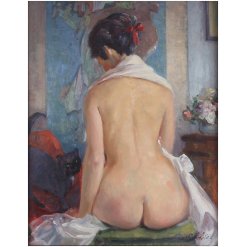 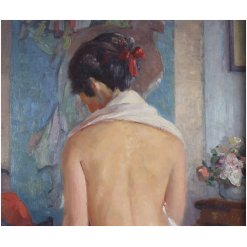 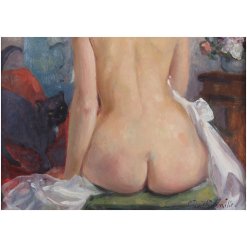 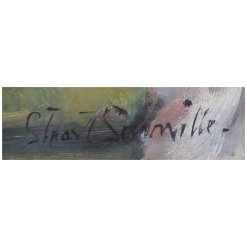 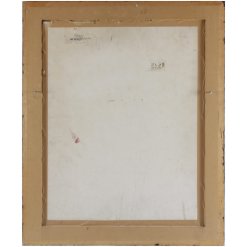 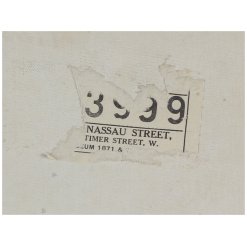 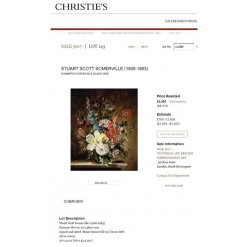 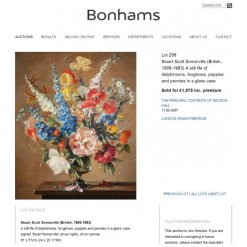 A well painted oil on canvas painting by Stuart Scott Somerville (1908-1983) of a seated nude with her cat beside her.  Her curvy figure is sensuous although her pose conveys a sense of innocence.

Provenance:  There are two partial exhibition labels on the reverse from James Bourlet & Sons.

Biography:  Born at Arksey, Yorkshire on 6 February 1908, son of artist and collector Charles Somerville and his wife Rose Annie née Chantree, who married in London in 1905, and brother to ‘Peggy’ Margaret Somerville and to Rosemary Somerville. He studied under his father and his fascination with the female nude began at the age of 15, he even had his gold medal at one exhibition rescinded when his age was realised, as the subject matter was deemed inappropriate for ‘a boy of his years’. This interest was furthered when on expedition in East Africa 1934-1935 recording the British Museum expedition and though in the last two decades of his life he worked assiduously on the female form, he almost never showed, let alone exhibited these works.

A painter of flowers, landscapes, figures and interiors he exhibited at the Royal Academy in 1925 aged 17 the youngest to do so since Landseer and continued until 1961, also exhibiting at the Royal Institute of Oil Painters, Royal Hibernian Academy, Royal Scottish Academy and the Fine Art Society. Somerville exhibited from Ashford, Middlesex 1925, Dickling, Sussex 1933, Haywards Heath, Surrey 1935 and London 1936. A member of Ipswich Art Club 1946-1966 exhibiting an oil ‘Flower Piece’ in 1974 from his home at Newbourne Hall, near Woodbridge and worked in Suffolk from 1945 until his death, always contributing and supporting local exhibitions and festivals both in Ipswich & the county. Often eclipsed by his sister Peggy with his floral paintings in the Dutch manner. He died of cancer at Ipswich in 1983.