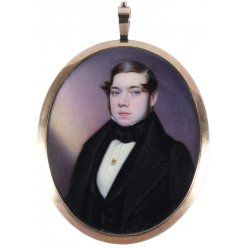 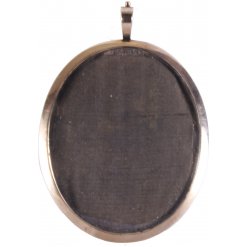 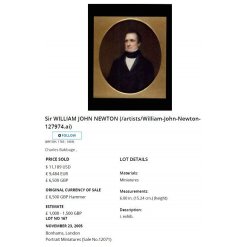 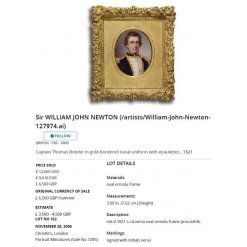 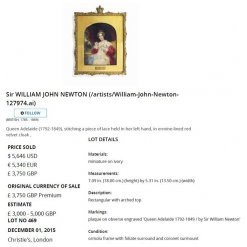 An antique watercolour miniature painting of a gentleman by Sir William Newton (1785-1869).  He is wearing a black jacket, white shirt and black stock.

Frame:  The miniature is glazed and set within an oval gold frame.  The reverse of the frame also glazed over a silk backing.

Biography:  Sir William John Newton (1785–1869) was an English miniature-painter, in fashion in the early part of the 19th century.

Born in London, he was the son of James Newton the engraver, and nephew of Willam Newton (1735–1790) the architect. He became one of the most fashionable artists of his day, and for many years his only real rival was Sir William Ross. In 1831 he was appointed miniature-painter in ordinary to William IV and Queen Adelaide, and from 1837 to 1858 held the same post under Queen Victoria. He was knighted in 1837.

Though popular, Newton was never elected to the Royal Academy, but was a constant contributor to exhibitions there from 1808 to 1863. He found a method for joining several pieces of ivory to form a large surface, and was then able to paint some larger groups. Three of these were: The Coronation of the Queen, 1838; The Marriage of the Queen, 1840; and The Christening of the Prince of Wales, 1842.

Many of Newton’s portraits were engraved. Some drawings by Newton, among them a self-portrait, went to the print room of the British Museum.

He long resided in Argyll Street, London; after his retirement he moved to 6 Cambridge Terrace, Hyde Park, where he died 22 January 1869.