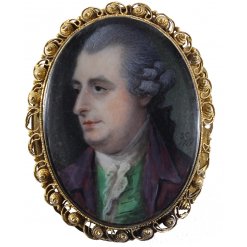 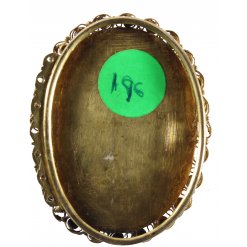 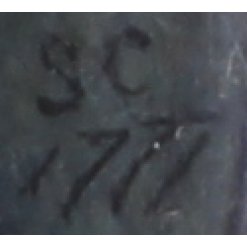 An antique watercolour miniature painting of a gentleman by Samuel Collins (fl. 1750-1780). He is wearing a mauve coat, green waistcoat, white stock and frilled chemise, his wig powdered and worn en queue.

Frame:  The miniature is glazed and set in a gilt metal frame with pierced filigree border, the reverse with bracelet clasp mount.

Biography:  Samuel Collins was born at Bristol, the son of a clergyman, and was brought up as an attorney. By the middle of the eighteenth century he was in good practice at Bath as a miniature painter, both in water-colour and enamel. Nollekens describes him as “a very indifferent miniature painter, and, what was worse, a man of gay and expensive habits.” He appears to have got into financial difficulties, which made it advisable for him to leave Bath around 1762.

He went to Ireland, leaving Ozias Humphrey, who had been his pupil, to succeed to his practice. In Dublin he soon found plenty of employment, and enjoyed a high reputation as a miniature painter. He painted both on enamel and on ivory. Portraits by him of George III and of the second Viscount Gage were exhibited at the Special Exhibition of Portrait Miniatures in 1865.