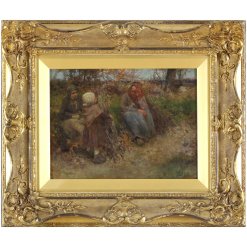 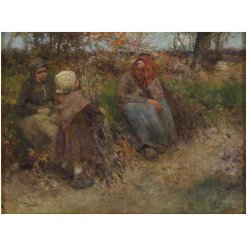 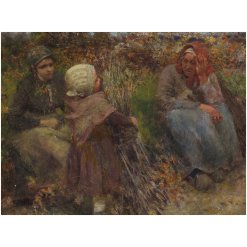 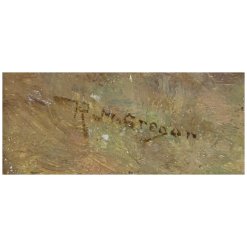 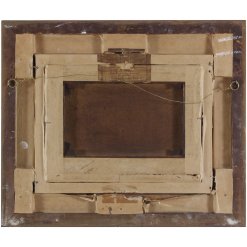 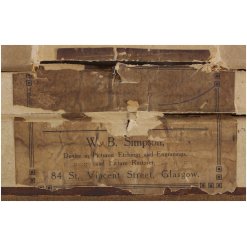 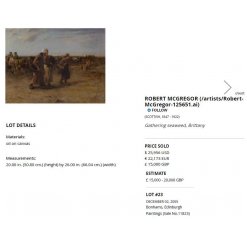 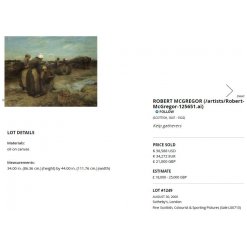 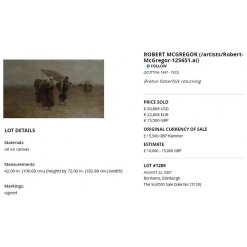 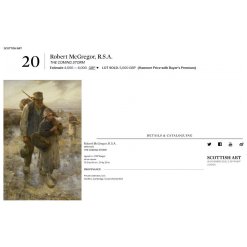 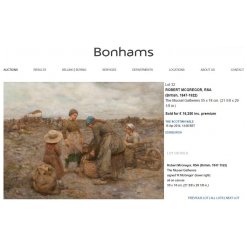 An oil on canvas painting by Robert McGregor (1847-1922) entitled “Faggot Gatherers” depicting a Mother with her children gathering firewood along a road.

Condition:  Painting and frame are both in good condition.  There is some craquelure commensurate with age, and some small areas of re-touching on the girl’s dress and in the margins.

Biography:  Robert McGregor is renowned for his pioneering approach in the genre of work scenes of rural life. His simple pastorals are notable for a unique combination of the French influences on the one hand, and the artist’s loyalty to the old traditions of the Scottish painting on the other.

McGregor had no formal art training until his relocation to Edinburgh, where he later attended the Royal Scottish Academy, yet he is believed to have received some artistic instruction from a Frenchman while still in Yorkshire. Once at the R.S.A., McGregor made rapid progress, getting elected an associate in 1882. He became a full R.S.A. member seven years later.

Although McGregor never worked in a foreign atelier, his style was influenced by continental painters, including Courbet and Millet. Unlike other Scottish painters, the majority of whom remained loyal to a local palette, in his colourist approach McGregor maintained a distinctively French use of the grey scale, with a light effect similar to that seen in black and white photography.

Having adopted an artistic approach derived from the works of Courbet, McGregor frequently reduced the foreground of his paintings in order to increase a sense of the bulkiness of the peasants’ figures.