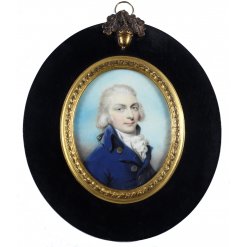 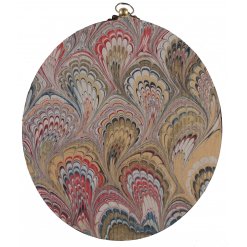 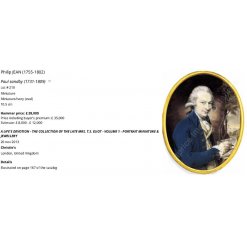 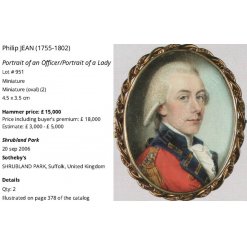 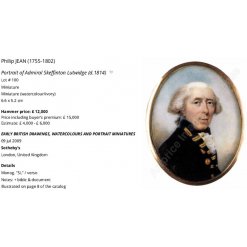 An antique watercolour miniature painting of a gentleman by Philip Jean (1755-1802). He is wearing a blue coat, white waistcoat, stock and frilled chemise, his hair powdered and worn en queue.

Frame:  The miniature is glazed and set within a gilt metal mount in a lacquered wood frame.

Condition:  Some very light surface dirt under the glaze. Otherwise the work appears to be in good condition.

Biography:  Jean was born in Saint Ouen, Jersey, the son of Nicholas Jean and Marie Grandin. He was at first in the English Royal Navy, but later devoted himself to painting. He was chiefly a miniaturist, yet also worked with oils.

While settled in London, Jean painted portraits of many members of the British Royal Family, amongst them the portraits of George III, of the Queen Charlotte, of the Duke and Duchess of Gloucester and of their children. He exhibited at the Royal Academy from 1787 to 1802. Amongst other collections, his works belong to the Victoria and Albert Museum and Windsor Castle.

Jean was married twice. His first wife (married 1781 in Jersey) was Anna (or Anne) Noel (1758-1787), the daughter of a large and prominent Jersey family. They had two children; Roger, who also became a miniaturist, and Anne Marthe. Jean remarried after Anna’s death, to Marie de Ste Croix (1763-1820) and they had 4 children. He died in Hempstead, Kent.