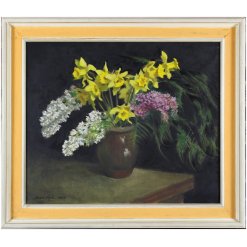 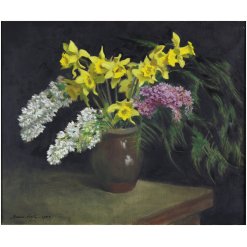 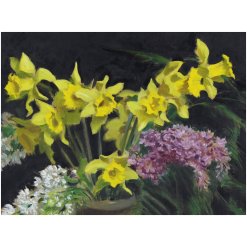 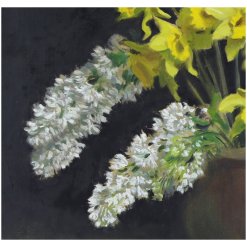 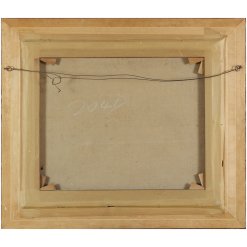 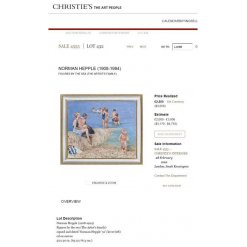 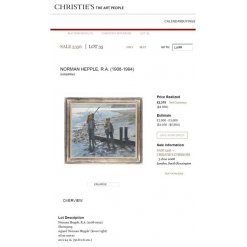 A lovely oil on canvas still life painting by Norman R Hepple (1908-1994) of a vase of daffodils and hyacinths.  The vibrant colours of the flowers are picked out beautifully against the dark background of the painting.

A couple of examples of auction sales of works by this artist are included at the end of the photos.

Frame:  Set in a modern wooden frame with a fabric covered inner mount.

Condition:  Painting and frame are both in good condition. The fabric inner mount is a little marked in places.

Biography:  Robert Norman Hepple RA RP (1908 – 1994) was an English portrait painter, engraver and sculptor best known for his portraits of the British royal family. He was elected a member of the Royal Society of Portrait Painters in 1948 and served as their President from 1979 to 1983. Elected as an Associate Member to the Royal Academy of Arts in 1954, Hepple became an Academician in 1961.

Hepple was born in London and was the son of the painter Robert Watkin Hepple and the nephew of Wilson Hepple, the animal painter from Northumbria. Hepple studied at Goldsmiths College of Art and then the Royal Academy Schools, under Sir Walter Russell, where he obtained a scholarship in engraving. During the 1930s Hepple illustrated the books of the Shropshire novelist Mary Webb.

During the Second World War Hepple joined the Auxiliary Fire Service which in 1941 became the National Fire Service. A number of other artists had joined the NFS and a firemen artists’ committee formed which included Leonard Rosoman, Bernard Hailstone, Paul Lucien Dessau and Robert Coram. As well as contributing to both War Artists’ Advisory Committee, WAAC, and specialist civil defence art shows, the firemen held several of their own exhibitions.  In 1943 WAAC commissioned a series of drawings from Hepple of NFS personnel and were to purchase another five paintings, including a fine portrait of a Canadian fire-fighter, from him before the war ended.

After the war Hepple resumed his career as a professional artist. In 1950 he designed a poster for British Railways, Service to Industry and Shipbuilding. He painted portraits of Queen Elizabeth II on three occasions;- in 1965 for the Royal Marines, in 1978 for the island of Jersey and also in 1978 for the submarine officers of HMS Dolphin. He painted notable portraits of Prince Charles, Prince Philip and of the Queen Mother, who sat for him for four separate commissions. His 1978 portrait of Queen Elizabeth was adapted for use on banknotes issued in Jersey. Failing eyesight eventually curtailed his painting career. He died from injuries he received after being run over by a car whilst returning to his home in Richmond in London from a meeting at the Royal Academy.