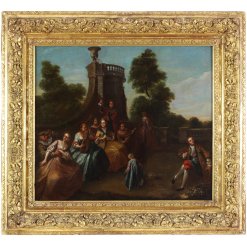 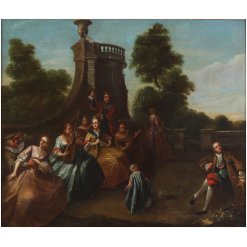 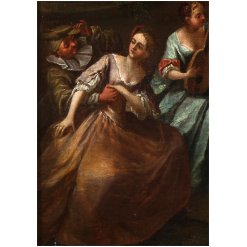 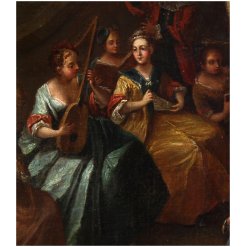 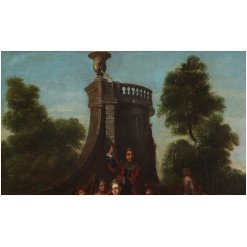 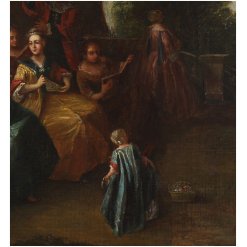 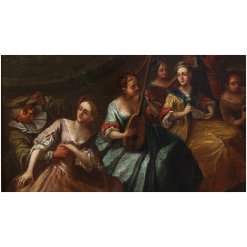 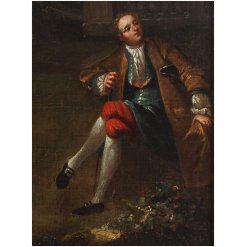 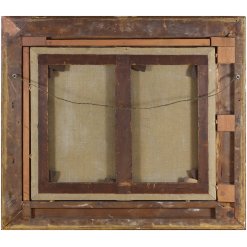 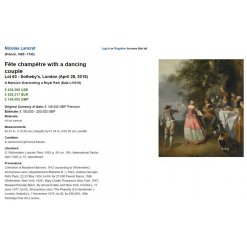 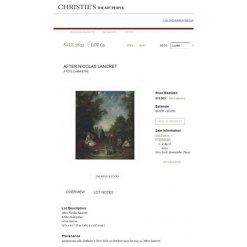 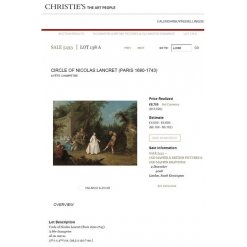 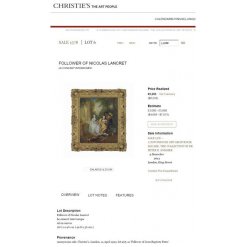 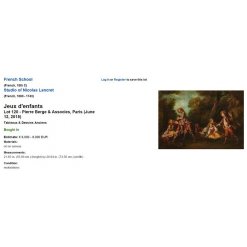 A classical oil on canvas French painting from the early 1700’s from the circle of Nicolas Lancret (1690-1743). It depicts a group of people, some of them musicians, relaxing on the terrace within the formal grounds of a garden.  One lady is reading, another is fending of the amorous intentions of the man behind her, another is enjoying the view.

Works by Nicolas Lancret sell for very high prices, and those from his circle and followers also command significant prices at auction. Some examples are included at the end of the photos.

Frame:  Presented in the original, elaborately decorated gilt wooden frame, which is deep and heavy and of a very high quality.

Condition:  Canvas is in good condition with no evidence of repairs and paint and varnish are sound.  Light craquelure commensurate with age. Slight rubbing by the top. Some small spots of over-painting visible under UV light, but nothing excessive. Frame is in good condition.

Biography:  Nicolas Lancret (1690 – 1743) was born in Paris, and became a brilliant depicter of light comedy which reflected the tastes and manners of French society under the regent Orleans.

Two pictures painted by Lancret and exhibited on the Place Dauphine had a great success, which laid the foundation of his fortune, and, it is said, estranged Watteau, who had been complimented as their author. In 1718 he was received as an Academician, from thereon becoming a very respected artist, especially amongst the admirers of Watteau. He completed works to decorate the Palace of Versailles, while his style was later to prove popular with Frederick the Great.  Lancret’s populairty was reflected by the decision to make him a councillor at the Academie in 1735.

Lancret completed numerous paintings, a significant proportion of which (over eighty) were engraved. Although he completed several portraits and historical pieces his favourite subjects were balls, fairs, village weddings and so forth. In this respect he was typical of Rococo artists.

It is generally considered that the artist produced his best work towards the latter end of his life, displaying, in the minds of several art historians, an increasing ability to create a sense of harmony between art and nature.   Lancret’s last painting, Family in a Garden, The National Gallery, is considered by Levey to be his ‘masterpiece’.