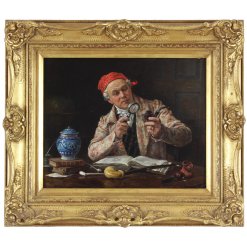 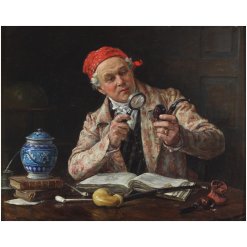 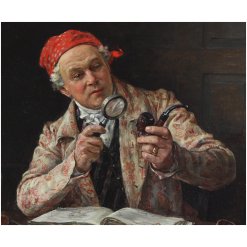 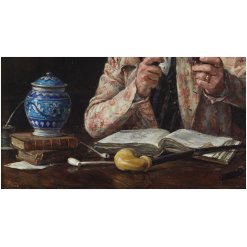 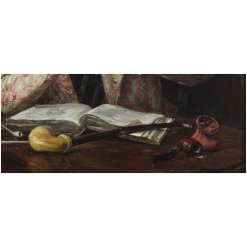 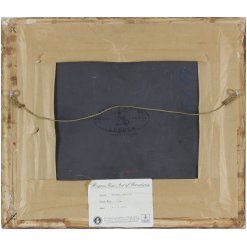 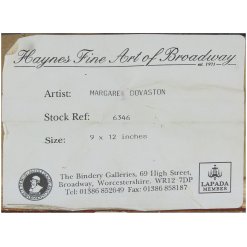 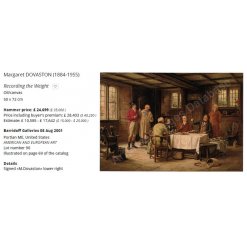 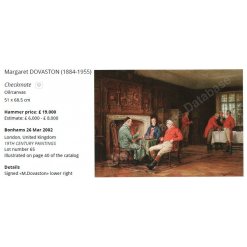 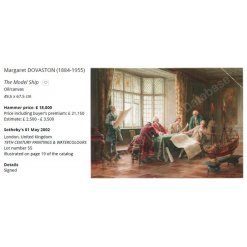 A fine oil on panel painting of a man in an interior by Margaret Dovaston (1884-1955) entitled “The Pipe Enthusiast”.  It depicts a man wearing a smoking jacket seated at a table inspecting one of the pipes from his collection with a magnifying glass.

Margaret was trained at the South Kensington School of Art studying under its founder Arthur Stockdale Cope RA. She finished her formal art education by winning a scholarship, enabling her to spend five years attending the Royal Academy Schools (1903-1908), winning several medals.

She exhibited at the Royal Academy in 1908 and 1910. She also exhibited 18 oil paintings and 20 watercolours at Walker’s Gallery, London in 1910, as well as 12 paintings at the Royal Society of British Artists (RBA) between 1910 and 1913. In 1910, she had been elected a member of the RBA and had established a studio at Freeland Road, Ealing Common. Also in 1910, she was active in establishing The Ealing Art Guild, later to become the Ealing Arts Club; she organised the first of its annual art exhibitions, and was appointed Secretary of the Guild.

During the second decade of the Twentieth Century, and beyond, she established herself as both a commercial and war artist. As well as book cover design, she contributed illustrations to Deeds that Thrill the Empire and Hutchison’s Story of the British Nation. Both these publications were produced in instalments. In 1915 she produced a night-time watercolour of CSM Reid leading reserve troops across the crater-strewn ground of Hill 60 to the front line, with shells exploding all around them. The picture was bought by the Queen’s Royal Surrey Regimental Association for permanent display in the regimental museum at Clandon Park, Guildford.

In 1925, she moved to Acton where she had a studio built for herself, and lived and worked there until the end of her life. It was here that she developed her style for which she became well known and popular. Typically her oil paintings illustrated elaborate English architectural interiors used as settings for groups of finely-drawn Eighteenth, or early Nineteenth Century figures in detailed Georgian costume. They were created from her imagination as conversation pieces to which it was mainly left for the vendors or owners to provide titles. They were immediately acquired by her agent Mitchell of Duke Street, St James’s, London who sold the majority to the USA and Canada.

The original oil paintings are still desirable and are regularly sold at the main London auction houses and around the world.