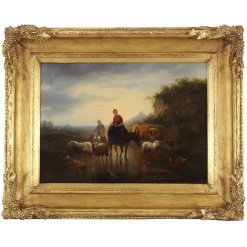 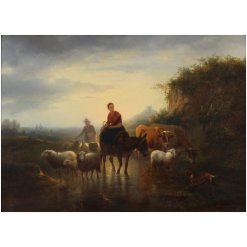 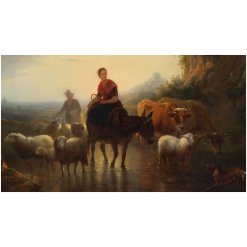 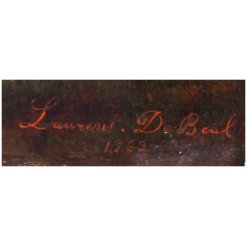 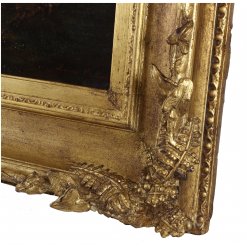 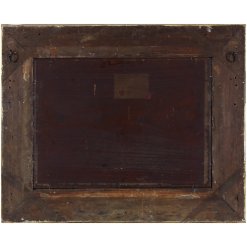 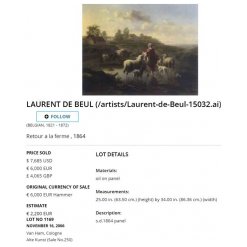 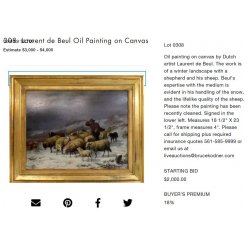 An oil on panel painting by Laurent de Beul (1821-1872) entitled “End of the Day” depicting a girl herding cattle in the twilight of dusk.

Condition:  Painting and frame are both in very good condition. There is some re-touching in the margins visible under a blacklight.

Biography:  Laurent de Beul (1821-1872) was the brother of the painters Henri De Beul and Franz De Beul . He studied at the Academy of Dendermonde (1857-1861, with Frans Verhas ) and then at the Academy of Fine Arts in Brussels (1860-1869). For his studies in Brussels, he enjoyed a scholarship from the City of Dendermonde and a scholarship from the State.

He painted religious subjects, some military scenes and commercial landscapes in which scenes with cattle, shepherds and / or shepherdesses were incorporated. His religious scenes such as “Veroren son” and “Christ heals a sick person” fell through the realistic representation. For example, he placed the healing scene in a clearly Western European-style farmhouse. His too short a career remains poorly documented.

He exhibited in 1868 at the Salon in Montpellier. Some of his drawings are in the Dendermonde museum.