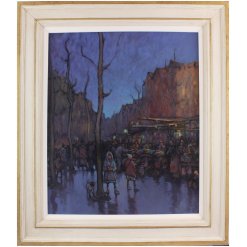 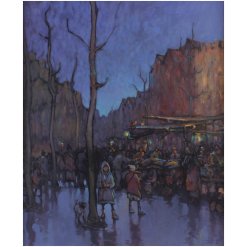 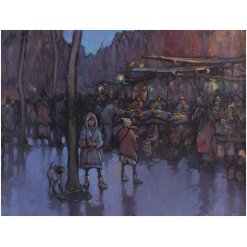 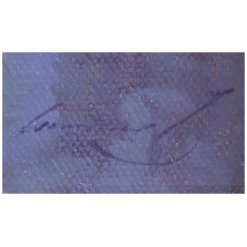 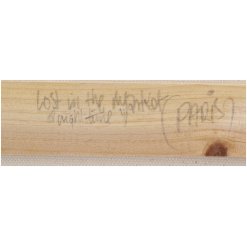 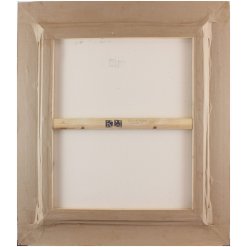 A superb oil on canvas painting by Ken Moroney(1949-2018) entitled “Lost in the Market, Night Time” depicting a child with her dog standing alone by a busy market street in night time Paris.

This is an exceptional painting, with a fantastic use of colour and technique to capture the bustle of the market alongside the mood of the night.  Very rare type of painting, especially one done this well.

Frame:  Painting is presented in a white and gold wooden frame.

Biography:  Ken Moroney was born on the 14th February 1949 in South London. Of Anglo Irish parentage, his father was typical of his generation and worried about Kens artistic temperament which he viewed as effeminate. As a result Ken took up boxing and won a gold medal for South London in his teens. His art continued to flourish with his trademark striking use of colour. His main medium is oils and he favours romantic subjects of Edwardian times.

Ken has travelled extensively and spent two years working for major galleries in New York. The Royal Academy nominated him in 1976 as being one of the few promising young artists to emerge this century: “Ken Moroney has considerable talent; any painting purchased now can only be seen as a sound long term investment.”

Ken Moroney’s work, some of which is painted under the pseudonym JJ Bellman, now hangs in many important collections and has had paintings exhibited at The Royal Academy (London), The Beau (Paris) and the Kline Galleries (Canada). Kens work has also been exhibited in Frost and Read, Bourne Gallery, Hollywood Road Gallery, Thompson’s Gallery, Gallery Kaleidoscope, David Messum’s Gallery, John Davies in Stowe-on-the-Would, Duncan Miller London and American Connection.