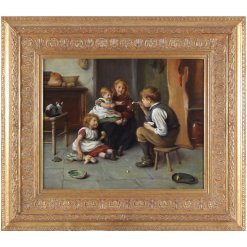 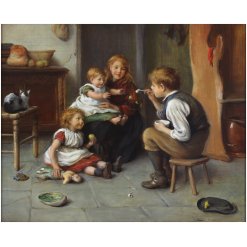 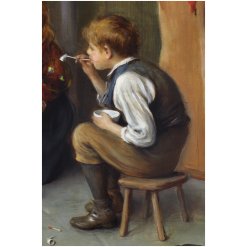 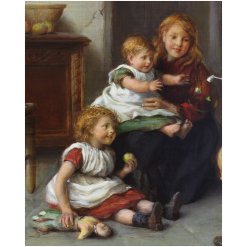 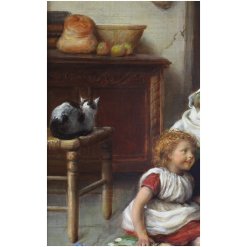 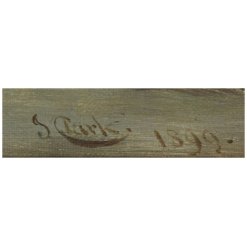 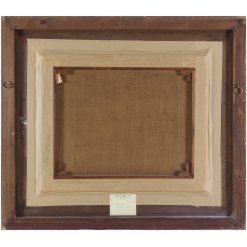 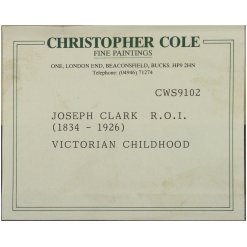 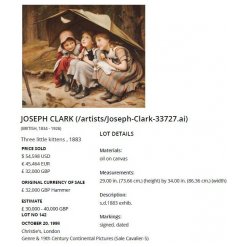 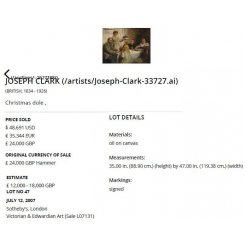 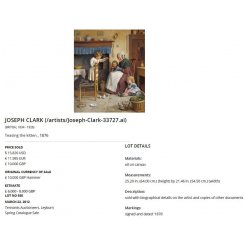 An oil on canvas painting by Joseph Clark (1834-1926) entitled “Victorian Childhood” which depicts a group of young children playing in an interior.  A little boy is sitting on a stool blowing bubbles to the great amusement of an infant sitting on a girl’s lap.

A beautiful painting of a typical Victorian interior scene by this renowned artist.

Condition:  Painting and frame both in good condition. There is very small area of re-touching just below the stool.

Biography:  Joseph Clark (1834-1926) was born near Dorchester, Dorset. He studied painting in London under J. M. Leigh (1808-1860), who was himself the only pupil of William Etty, RA (1787-1849), the celebrated painter of classical and historical subjects. Clark specialised in depicting domestic genre subjects of a tender nature which generally featured children and he also painted a small number of biblical subjects.

In 1857 Joseph Clark submitted his first picture for the Royal AcademyExhibition, entitled The Sick Child; it was accepted. He exhibited regularly at the Royal Academy and at the Royal Institution until a few years before his death. In 1876 he was awarded a bronze medal at the Centenary Exhibition at Philadelphia. Then, in 1877 his painting Early Promise was purchased for the nation and a further painting Mother’s Darling was purchased for the nation in 1885; both paintings are held by the Tate. His first painting offered at auction realised £4.17s.6d, a high price for the time and his paintings continue to command good prices when they come up at auction today.

Whilst avoiding the overly sentimental style of some of his contemporaries, Joseph Clark frequently chose subjects which sought to remind people of their good fortune in having a caring family at a time when many children grew up as orphans in workhouses.

Joseph Clark enjoyed considerable success with his paintings, maintaining both a London house and a home in the country for much of his life.