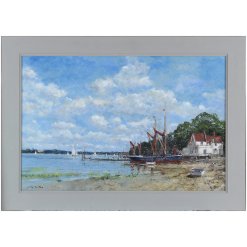 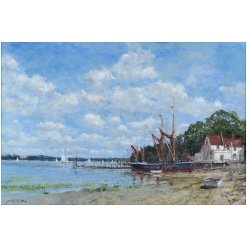 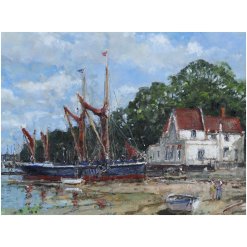 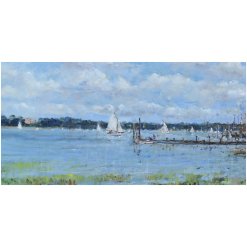 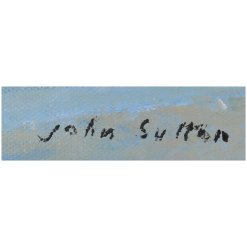 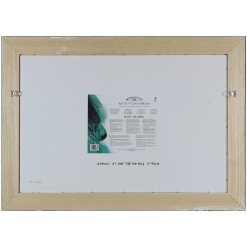 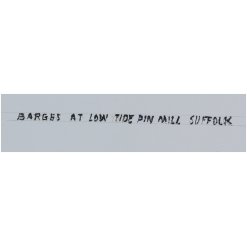 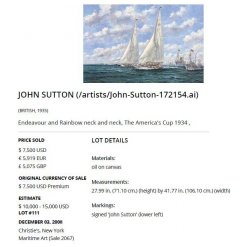 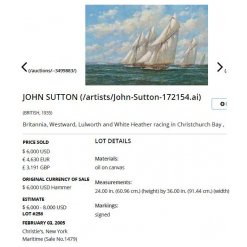 A high quality oil on artist’s board painting by John Sutton (born 1944), entitled “Barges at Low Tide Pin Mill”. It depicts sailing barges beached at low tide, with other small yachts sailing in the background. Pin Mill is a hamlet on the south bank of the tidal River Orwell, located on the outskirts of the village of Chelmondiston on the Shotley peninsula.

Signature:  Lower left.  Title is inscribed on the reverse.

Biography:  John Sutton born in 1935, is a marine and landscape painter. He studied at the Norwich School of Art, followed by a postgraduate year at the Brighton College of Art.

Following a number of years teaching Art, at an exhibition in the Assembly House Norwich, a London art dealer saw his work and subsequently offered him a one man exhibition, allowing him to concentrate on painting full time. Following this there were exhibitions in the USA, mainly Boston and South Carolina.

John originally started painting the rurality and simple beauty of Norfolk’s Broadlands. He later matured into maritime scenes, before taking an interest in Edwardian London.

From the 1980’s John Sutton’s work was held exclusively at the Eaton Gallery in Duke Street, London, which has since closed on the death of the gallery owner.

Travelling has also been the catalyst to inspire subjects for painting. Visits to Venice, Egypt and India, have been featured, where the light, and a variety of buildings and people are dominant.