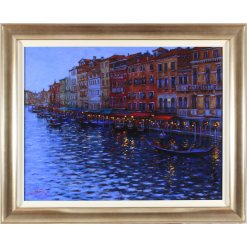 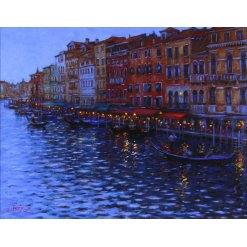 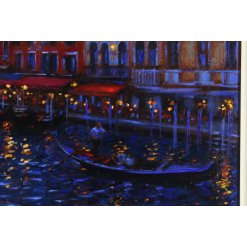 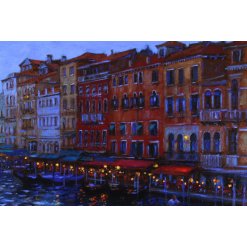 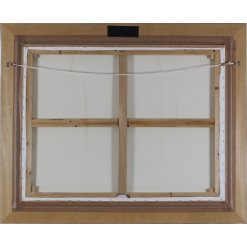 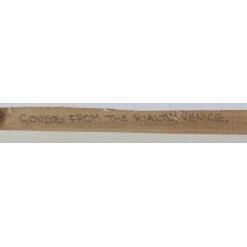 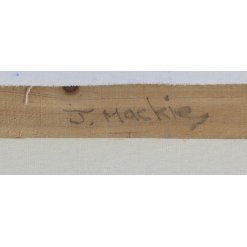 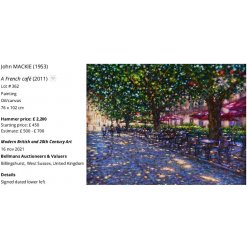 JOHN MACKIE
“Gondoli from the Rialto”

A spectacular oil on canvas painting by the American artist John Mackie (1953-) entitled “Gondoli from the Rialto” depicting a scene in Venice at night.  The way the lighting has been captured by the artist is magnificent.

Signature:  Lower left.  Also signed and titled on the frame.

Biography:  John Mackie was born in Glasgow in 1953 and studied at the Glasgow School of Art between 1972-76. It was there that he was first introduced to the Scottish Colourists and the Glasgow Boys, admiring their bold use of colour and powerful draughtsmanship. Having already been influenced by Monet, Renoir, Pissarro, Cezanne and Van Gogh, John was eager to experiment with their various styles and techniques.

After a travelling scholarship to the USA and Canada (where John first saw the work of Thom Thompson and the Canadian Group of Seven) he lived and painted in Italy and France inspired by landscapes and cities around Tuscany, Umbria and Chianti. In France, Paris was, of course, a source of many Paintings on the Place Du Tertre (the Artists Square) and the Champs Elysees: but it was in the South of France where John felt most at home, in the Cities of Carcassonne, Montpellier, Beziers and Narbonne where he painted bustling markets and elegant sun-dappled avenues which still feature prominently in his work today.

John has always loved to travel and work in Italy where Venice, Florence and Rome have been constant sources of inspiration.

Venice has been painted so many times by others but John feels that with every visit and exploration that ‘Magic’ opens up and allows him to express the amazing atmosphere that just says ‘Come on let’s see what you can do!’ Florence is elegant and the Views from his favourite spot, The Piazza Michelangelo, are always a great Challenge. In Rome there are so many wonderful subjects with the Trevi Fountain, the Spanish Steps and the Colosseum amongst his Favourites. John also visits Fethiye in Turkey where he spends time sketching in the Markets, where the people haggle and deals are done.

John currently lives in West Yorkshire with his wife Vanessa and two Daughters Jade and Saffron. He has exhibited widely for over 40 years at the Royal Scottish Academy as well as in the USA, Germany, London, Dublin and Scotland.