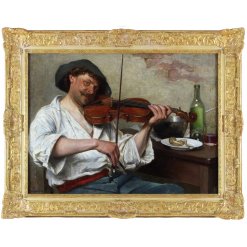 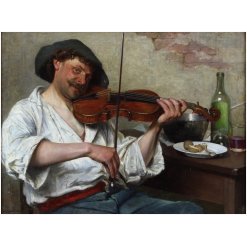 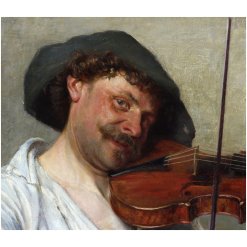 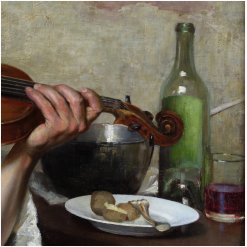 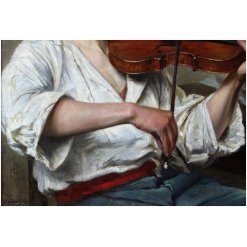 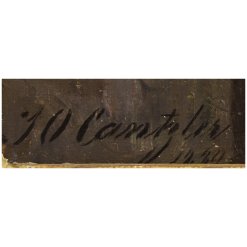 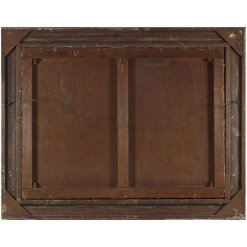 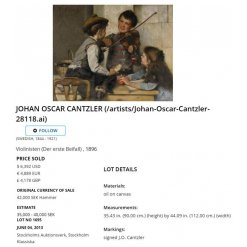 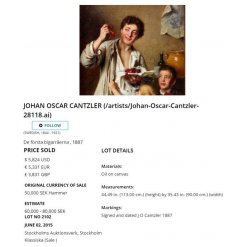 JOHAN CANTZLER
“Playing For His Supper”

An oil on canvas painting by Johan Oscar Cantzler (1844-1921) of a violinist playing for his supper.

Condition:  Painting and frame are both in very good condition.  Scattered spots of re-touching throughout.

Biography:  Johan Oscar Cantzler (February 20, 1844 – October 27, 1921) was a Swedish painter and cartoonist specialising mainly in portrait and genre images.  He also made drawings for the Swedish banknotes in the denominations of 5, 50 and 100 kr.

Cantzler first worked as a trade bookkeeper, the same profession as his father.  He then decided to seriously engage in painting.  His education founded him as a student of Gillis Hafström and Edvard Perséus and then finished it in Paris .  Returning to Sweden, he participated in the foundation of the New Artistic Guild in the early 1890s.  As a painter, he usually restricted himself to portraits and genres.  He painted a large number of oil paintings that often ended up in mansions and in other individual collections.  Cantzler is represented at, among others, the National Museum  in Stockholm.