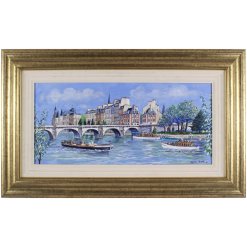 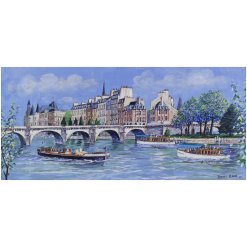 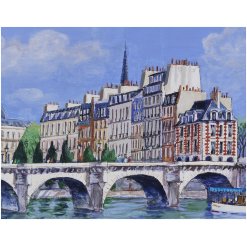 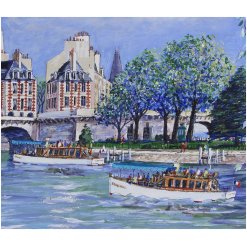 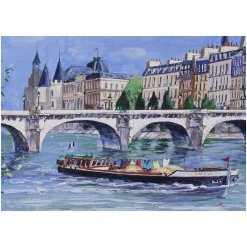 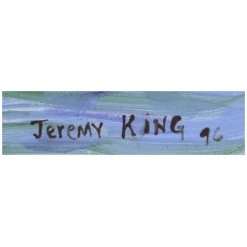 A striking oil on board painting by the acclaimed artist Jeremy King of Pont Neuf in Paris.

Frame: Set in a cream mount and a gold coloured wooden frame.

Biography:  Born in Oundle, Northants in 1933, Jeremy King studied at the Lancaster College of Arts and Crafts and, after National Service,  at the London University Institute of Education.  From 1958 to 1967 he taught art and 3D design pottery at Haymill Secondary School, Burnham.  In 1967 he left teaching to take up painting and lithography full time, working in ateliers in Spain, Paris and at the Curwen Studio, London.  In 1976 he moved to Port Isaac, Cornwall with his wife, painter Brenda King and their three children, and them to St. Ives.  He paints mostly on location and a number of images evolve from this practice.  Jeremy has exhibited widely throughout England, including the Royal Academy and the Royal Institute of Oil Painting.  His work is in the Tate Gallery Print Collection and is widely collected in North America.  His first one-man show in the USA was held in 1984 at the Ruthven Gallery, Lancaster, Ohio, followed by a second in 1986.  Jeremy has held successful shows in France and the USA and exhibited in Tokyo in 2000.  He also exhibited with his wife Brenda in Brittany in 2002.