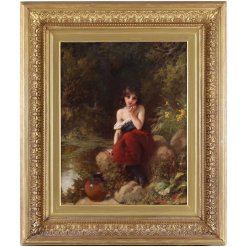 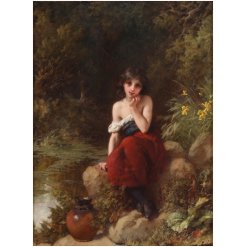 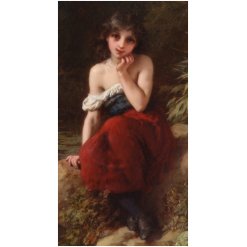 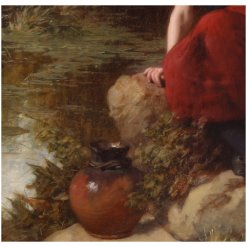 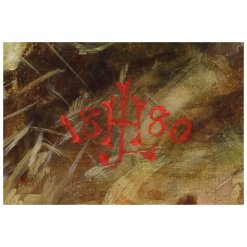 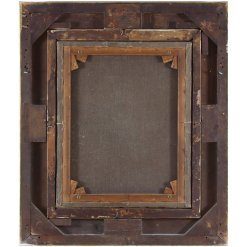 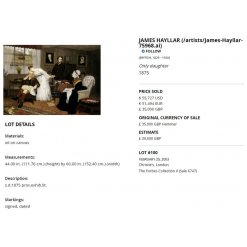 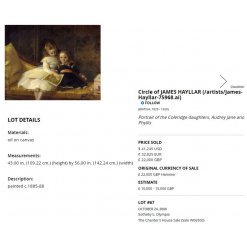 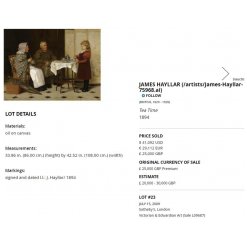 A charming antique oil on canvas painting by James Hayllar (1829-1920) entitled “The Water Gatherer”.  It depicts a young girl by the water’s edge with a large earthenware pot.

Biography:  Hayllar was born in Chichester in Sussex (now West Sussex), and received his training in art at Cary’s Art Academy in London; he painted Cary’s portrait in 1851. He went on to study at the Royal Academy.

Hayllar travelled in Italy from 1851–53. He was a regular exhibitor at the Royal Academy from 1850–98, and also showed work at the British Institution and the Royal Society of British Artists (RBA) – of which he was a member. He first became known as a portrait painter but later turned his brush to genre art, often featuring pretty young girls. His work became very popular. With George Dunlop Leslie (who also lived in Wallingford at the same time), he painted a large portrait of Queen Victoria to celebrate her Golden Jubilee in 1887 – the painting now hangs in Wallingford Town Hall.

He married Edith Phoebe Cavell (1827–1899), the aunt of Edith Cavell – the famous British nurse who was to be shot by the Germans for “treason” during World War I. They lived at a house called “Castle Priory” in Wallingford on the River Thames in Berkshire (now Oxfordshire) from 1875–99; scenes from village life in the area often featured in his work there. The couple went on to have 9 children, of whom four became recognised artists.