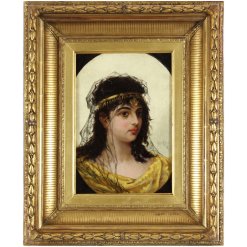 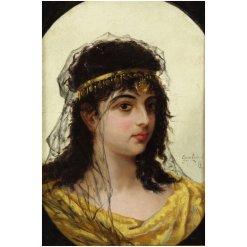 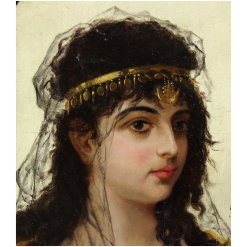 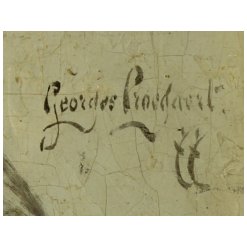 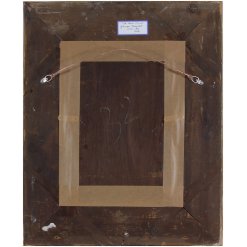 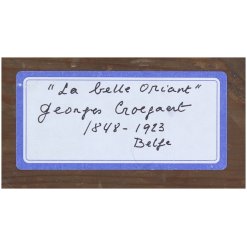 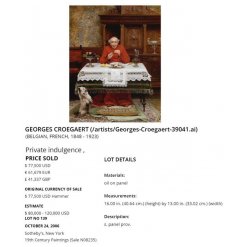 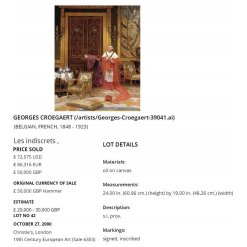 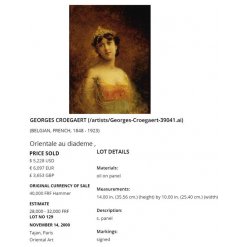 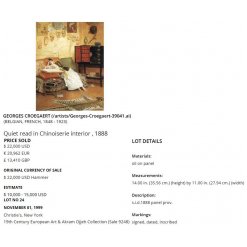 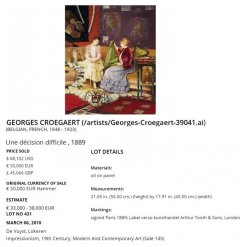 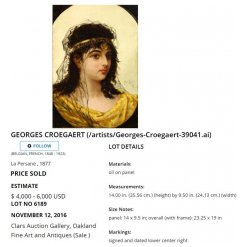 Works by this artist often achieve high prices at auction. Some other examples of his works are included at the end of the photos.

Condition:  Painting and frame are both in good condition.  There are some scattered spots of re-touching visible under a blacklight.

Biography:  Georges Croegaert (7 October 1848 – 1923) was a Belgian academic painter who spent most of his career in Paris. He is known for his genre paintings of scenes from elegant society and portraits of women. He also had a reputation for his humorous depictions of red-robed Catholic cardinals executed in a highly realist style.

He studied at the Antwerp Academy of Fine Arts and moved to Paris in 1876 where he remained active as an artist for the rest of his life. He had a successful career as a portrait and genre painter. His paintings received critical acclaim and were sought after by English and American collectors. He exhibited regularly at the Paris Salon between 1882 and 1914 and in Vienna in 1888.

Croegaert painted initially highly detailed still lifes, bird and flower subjects and occasional outdoor genre scenes. He built a career with his salon portraits of glamorous young women dressed in sumptuous fabrics set in luxurious rooms. He also gained a reputation as the leading artist in the genre of ‘cardinal paintings’, humorous representations of cardinals engaged in various mundane activities in lavish surroundings. His works are very narrative and the objects in the background support the story of the painting. His paintings are characterized by a high degree of finish and a rich palette.

In the last decades of the nineteenth century Croegaert painted a series of small portraits of women rendered in a highly realistic manner. The women are depicted at bust length and appear to melt into the pale unadorned backgrounds. These portraits have generic titles such as A Blonde (Russell-Cotes Art Gallery and Museum, Bournemouth) or Portrait of an Auburn-Haired Woman (Haworth Art Gallery). The artist’s usual eye for colour and detail and a concern for the overall effect of design characterize these paintings.

He died in Paris in 1923 after a long and successful career.