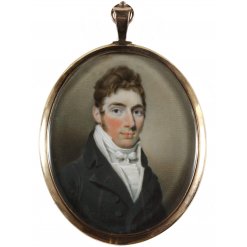 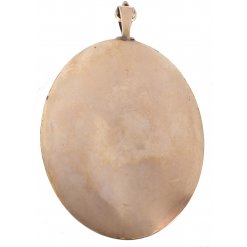 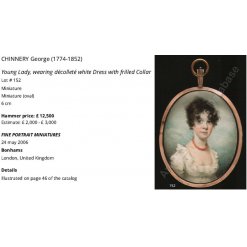 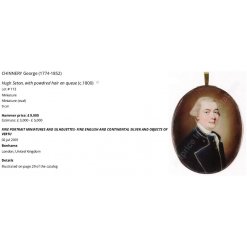 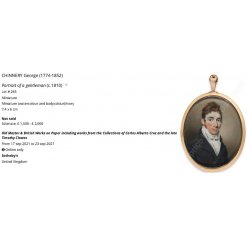 An antique watercolour miniature painting of a gentleman by George Chinnery (1774-1852). He is wearing a blue coat, white waistcoat, stock and frilled chemise.

Frame:  The miniature is glazed and set within an oval gilt metal frame.

Condition:  Some very fine and light craquelure to the black pigment. The extreme framing edges with some rubbing and associated loss, this is largely contained to the left framing edge.

Biography:  George Chinnery was born in London, where he studied at the Royal Academy Schools. He moved in 1796 to Ireland, where he enjoyed some success as an artist, and married Marianne (née Vigne) on 19 April 1799 in Dublin.

Chinnery returned to London in 1801 without his wife and two infant children. In 1802 he sailed to Madras (Chennai) on the ship Gilwell. He established himself as a painter there and then in Calcutta (Kolkata), where he became the leading artist of the British community in India.

Some of his most famous paintings are of the Indian family of Colonel James Achilles Kirkpatrick British Resident to the Nizam of Hyderabad.  Mounting debt prompted a move in 1825 to southern China.

From 1825 until his death in 1852 Chinnery based himself in Macau, but until 1832 he made regular visits to Canton (now Guangzhou). He painted portraits of Chinese and Western merchants, visiting sea-captains, and their families resident in Macau. His work in oil paint was closely imitated by the Cantonese artist Lam Qua, who himself became a renowned portrait painter. Chinnery also painted landscapes (both in oils and in watercolours), and made numerous drawings of the people of Macau engaged in their daily activities.

In 1846 he made a six-month visit to Hong Kong, where he suffered from ill health but made detailed studies of the newly founded colony.

He died in Macau on 30 May 1852 and is buried in the Old Protestant Cemetery there.