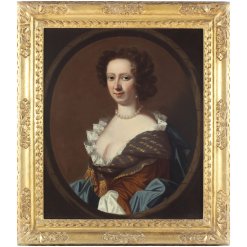 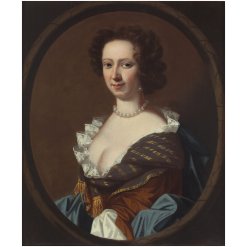 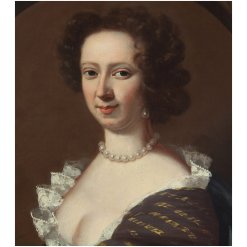 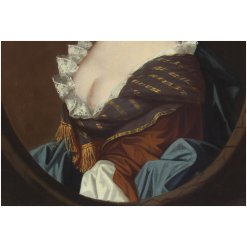 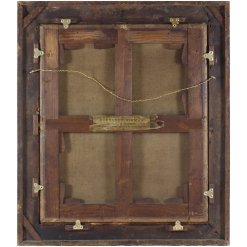 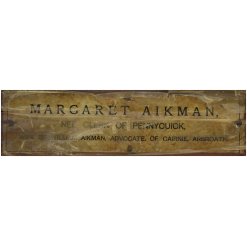 A very well painted antique oil on canvas half length portrait painting of a 17th Century lady.  Her name is Margaret Aikman (formerly Clerk), daughter of John Clerk (1st Laird of Penicuik) and wife of William Aikman of Cairney.  Her exact birth date is unknown, but is estimated to be between 1635 and 1681.

Her husband, William Aikman, was an eminent advocate at the Scottish Bar, and for some time held the office of Sheriff-Deputy of Forfarshire. He succeeded to the estate on the death of “the gude Laird,” but was only in possession for six years when he died.

Margaret’s Father, Sir John Clerk, 1st Baronet (died 1722) was a Scottish politician, created a Baronet of Nova Scotia on 24 March 1679. Sir John served in the Parliament of Scotland for Edinburghshire, and, in 1700, acquired the lands and barony of Leswade, near Edinburgh.  Sir John was the eldest son of John Clerk of Penicuik and Mary, daughter of Sir William Gray of Pittendrum. He married twice. With his first wife, Elizabeth, daughter of Henry Henderson, of Elrington, he had three sons and three daughters. With his second, Christian, daughter of the Reverend James Kilpatrick, he had four sons and four daughter. He died in 1722, and was succeed by his eldest son Sir John Clerk, 2nd Baronet.

Margaret’s Brother, Sir John Clerk of Penicuik, 2nd Baronet (1676-1755) was a judge, architect, antiquary and composer of baroque music. Sir John Clerk of Penicuik was one of the most talented men of his generation. He studied law in Glasgow and Holland, but to his father’s dismay often neglected his legal studies in favour of music. After a grand tour of Europe, Clerk returned to Scotland in 1700 where he became an advocate and an MP for Whithorn. He was one of the Scottish commissioners who negotiated the Treaty of Union and sat in the new Parliament of Great Britain in 1707. Clerk retired from politics the following year to rekindle his legal career and after inheriting his father’s estate in 1722 he devoted more and more time to cultured activities.

Provenance:  UK Private Collection. There is an old label on the reverse confirming the lady’s details.