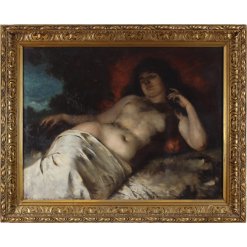 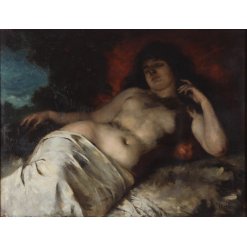 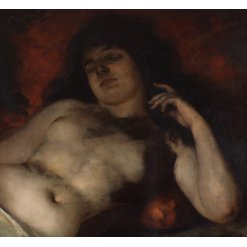 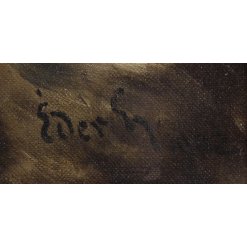 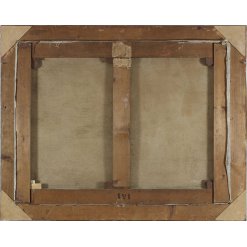 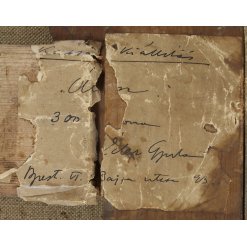 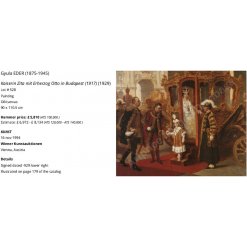 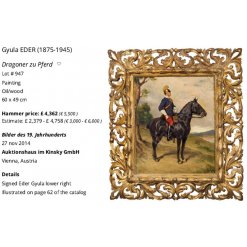 A large oil on canvas painting by Eder Gyula (1875-1945) of a reclining nude. She is resting with her eyes closed and her long hair flowing over her shoulder.

Condition:  Painting and frame are both in good condition. There is some scattered re-touching to the painting, mostly in the margins.

Biography:  Gyula Eder began his art studies in Budapest, where between 1901 and 1905 he studied at the Master School of Budapest led by Gyula Benczúr, and then he continued his studies at the Academy of Fine Arts in Munich, where he studied with Gabriel Hackl and Wilheim Diez. In 1911 he received the Marcell Nemes Prize, and, in 1913, he also won the Award of the Erzsébetváros Casino.

From 1902 he regularly exhibited his pictures in the group exhibitions of the Art Gallery. In 1903 he made a large-scale work decorating the ceiling of the Casino of Kosice.

In the last decade and a half of his life, he suffered several blows: his beloved wife Jolánka, died in 1932. No children were born. In 1936 he underwent unsuccessful surgery for an earlier accident which left him paralyzed in both legs and forced him to paint while sitting.

From then on he lived mostly alone. Annus Horváth, who joined the family in 1930 at the age of 15, helped him with his work. On January 26, 1945, the artist’s apartment was hit by a bomb, during which almost everything was destroyed. Due to a lack of medication, he was blinded first in one eye and then in the other. He died of pneumonia in 1945.

His pictures are mainly illustrations, portraits, mythological and religious images. Many of his paintings are preserved in the Hungarian National Gallery.