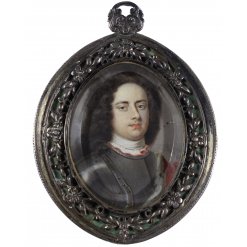 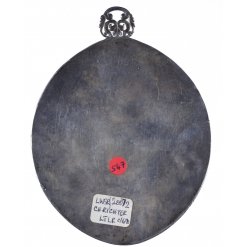 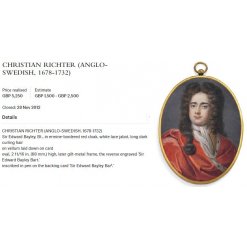 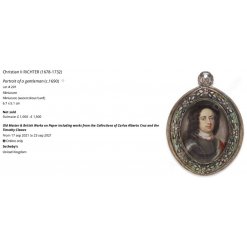 An antique watercolour miniature painting of a gentleman by Christian Richter (1774-1852). He is wearing armour, white stock, ermine trim and red velvet mantle.

Frame:  The miniature is glazed and set within a silver gilt and enamel frame.

Biography:  Christian Richter (1678-1732) was born in Stockholm in Sweden. His brothers were also artists. He first studied medal engraving with Arvid Karlsteen, and possibly also learnt the art of miniature painting from him. He next visited Berlin and Dresden, where he modelled a wax portrait of Augustus II. He was unable to obtain an appointment at the Court of Saxony and went to England instead.

He was in London by 1704. There he met fellow Swedes, including the painters Hans Huysing and Michael Dahl. He produced small copies in miniature (watercolour on vellum) of their oil paintings. His skill must have promoted their reputations as well as his own success as a miniaturist in London.