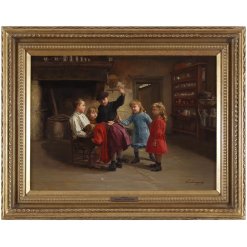 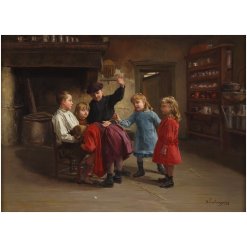 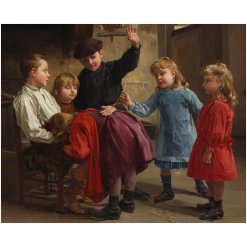 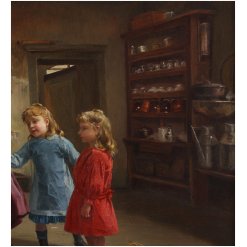 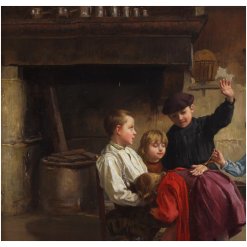 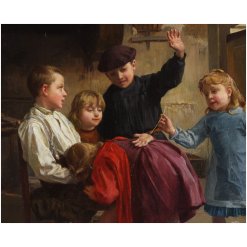 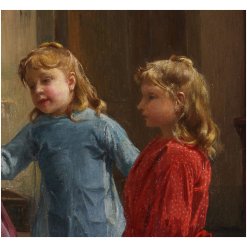 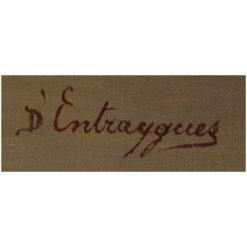 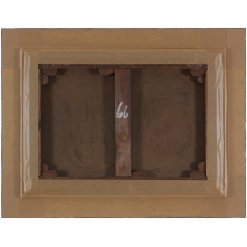 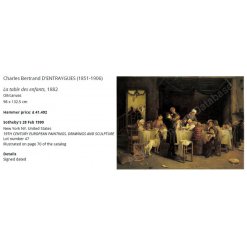 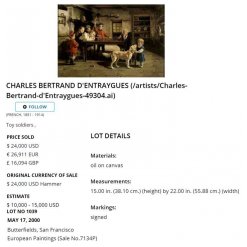 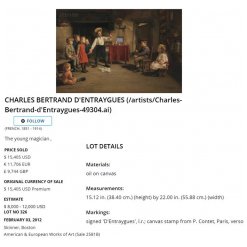 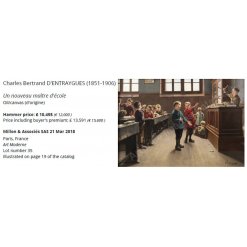 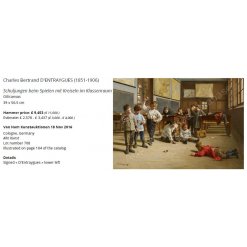 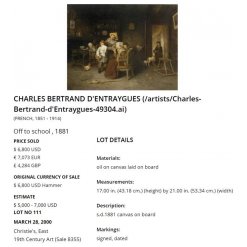 A fine antique oil on canvas painting by the French artist Charles Bertrand d’ Entraygues (1850-1929) of children playing in an interior.

Some other examples of his works by this artist are included at the end of the photos.

Condition:  Painting and frame are both in good condition.  There are some small areas of re-touching visible under a blacklight on the faces, chair, stove and a few other scattered spots.

Biography:  Charles Bertrand d’ Entraygues (1850 – 1929)  was born in the agricultural town of Brives in central France.  His artistic career was based on the depiction of scenes that he must have witnessed during his formative years.  The interiors of modest homes filled with children playing or families gathered around the dinner table are typical of d’Entraygues’ mature imagery as are paintings of choirboys engaged in playful, if slightly mischievous, activities.

As a young man, d’Entraygues began his studies at the Ecole des Beaux-Arts in Paris under the tutelage of Isidore Pils, an artist whose paintings often focused on the lives of ordinary people and the poor.  In 1876, d’Entraygues made his Salon debut with L’Embarras du choix [Embarassment of Riches].

This was the beginning of a long career of academic success. During the 1880s, d’Entraygues established a reputation for charming genre scenes featuring children. His 1882 Salon entry, La table des enfants, exemplifies his signature style, based in part on the humorous tradition of Dutch genre imagery, and in part on the French narrative painting that was developed in the eighteenth-century by artists such as Jean-Baptiste Greuze.

This type of anecdotal genre painting became increasingly popular in the last half of the nineteenth century. As d’Entraygues’ career illustrates, these amusing subjects were extremely successful at the Salon, but they were also much admired by the expanding bourgeois art collector.

With few exceptions, d’Entraygues exhibited at the Salon almost every year until 1906; in 1899 he won at Honorable Mention for La musique adoucit les moeurs [Music sweetens manners]. His work was well received by the public as well as the academic critics.

Like many of his colleagues, d’Entraygues also courted American art collectors, who represented a rewarding market for French genre painting.  He was particularly fortunate to have one of his paintings, Refreshments After Toil from 1887, included in the 1894 publication of Famous Paintings of the World.  This kind of positive exposure was invaluable in assuring potential American buyers that d’Entraygues’ work was of the highest quality.