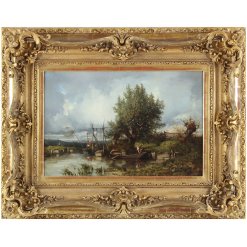 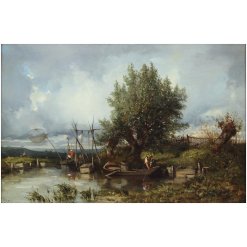 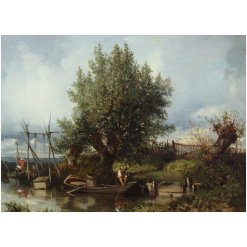 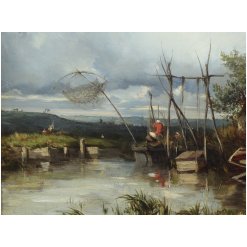 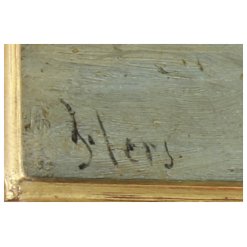 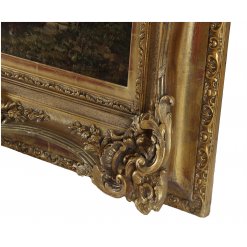 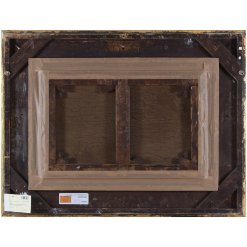 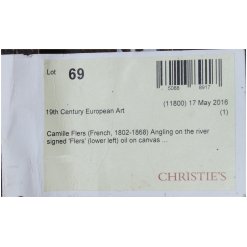 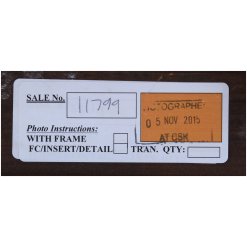 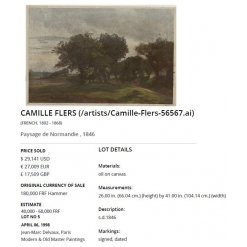 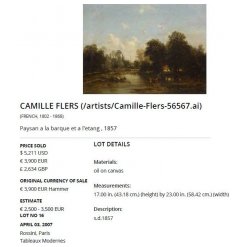 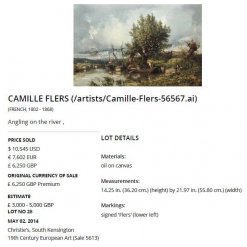 CAMILLE FLERS
“Angling on the River”

An oil on canvas painting by Camille Flers (1802-1868) entitled “Angling on the River” depicting people fishing from boats.

Condition:  Painting and frame both in good condition. There is craquelure commensurate with age, and some scattered patches of re-touching; mostly in the sky.

Biography:  Camille Flers (1802-1868) was born in Paris.  He was a student of Joseph François Paris (1784-1871)  and learnt the art of pastel with a pastel artist from the school of Maurice Quentin de La Tour.  Flers began exhibiting at the Salon in 1831 with his painting “Village Pissevache”.  He then exhibited his landscapes and pastels at the Salon until 1863.

Flers was the elder of the naturalist school of 1830. This “romantic-naturalist”, as he calls himself, was one of the first to work on the motif in the forest of  Fontainebleau, Barbizon, where he joined Jacques Raymond Brascassat (1804-1867), Antoine-Louis Barye (1795-1875) and Alexandre-Gabriel Decamps (1803-1860).  From 1848, he was considered one of the masters of the realistic movement.

Camille Flers is buried in Paris at the Père-Lachaise cemetery.