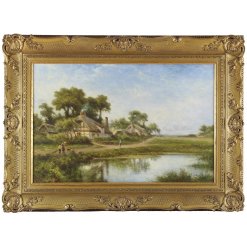 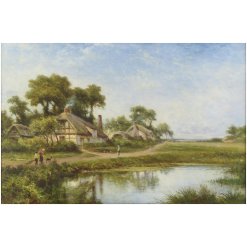 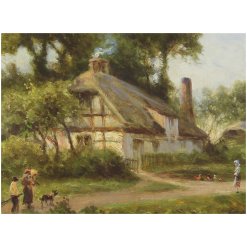 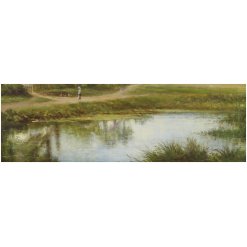 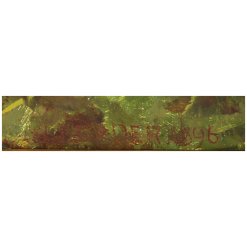 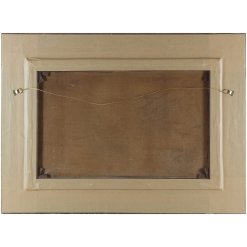 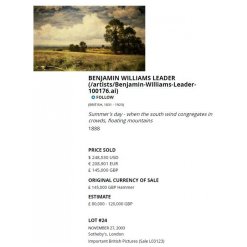 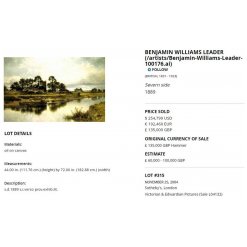 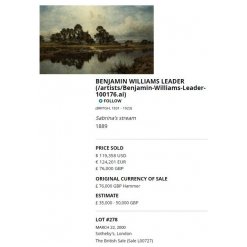 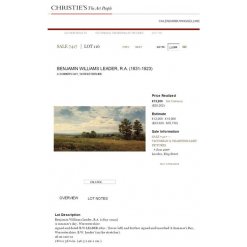 A charming and well painted large antique oil on canvas painting by the acclaimed artist Benjamin Williams Leader (1831-1923) depicting a river landscape with figures by a country cottage.

Condition:  Painting and frame are both in very good condition

Biography:  B.W. Leader was born Benjamin Williams on March 12, 1831 in Worcester, England. His father Edward Leader Williams, a civil engineer, knew and admired the landscape artist John Constable (1776-1837). In 1853, he became a probationer at the Royal Academy Schools where he studied for a short while. He favoured English home scenes, particularly riversides at evening time, country lanes and commons, and the village church. He produced landscapes throughout his long artistic career, and was considered as one of the most acclaimed Victorian landscape painters during his lifetime. His work was also extensively engraved.

During his first year at the Royal Academy, Benjamin exhibited and sold a painting entitled Cottage Children Blowing Bubbles. Thereafter, he sold his paintings to a number of leading Worcester citizens, and continued to exhibit in several venues. Besides the Royal Academy in London, he submitted his paintings to the National Institution and the British Institution in London, as well as to the Birmingham Society of Artists, and Liverpool Academy.

In 1857, he changed his name to Benjamin Leader to distinguish himself from the Williams family of painters, exhibiting in London. During the first year he exhibited as Benjamin Leader, he received favorable reviews, and by the late 1850s, the London-based dealers noticed and promoted his works.

From the middle of the 1860s, Leader replaced his Pre-Raphaelite detailed style with a more naturalistic portrayal of nature. His works reflected his study and admiration for the landscapes by John Constable, John Linell, and the French Barbizon School. By the 1880s, Leader had developed his own distinctive style of painting. He mastered the natural effects of light, particularly the amber luminosity from the late afternoon sun, which became his hallmark. His subjects also focused more on scenes of Worcestershire countryside, although he continued to paint and exhibit Welsh landscapes. He painted best what he knew best, which was Worcestershire‘s rivers, its leafy lanes, commons and fields, and its villages and churches. Scenes were typically depicted in the amber glow of the setting sun or the harsher brightness of the early morning after rain.

By the turn of the century, Leader achieved international fame, especially in America and Canada. In addition, numerous articles appeared about Leader’s career and work, such as those in The Strand and The Windsor magazines. In 1914, one of his paintings entered the royal collection, when King George V and Queen Mary purchased On the Llugwy, Bettws-y-coed. That year, the citizens of Worcester honored him with the Freedom of the City. However, World War I would bring tragedy to the Leader family, when their son Benjamin was killed in 1916. Throughout the war and the remaining five years of his life, Leader continued to produce large or medium-sized landscapes for the Royal Academy’s Summer Exhibitions. He died in his home on 22 March 1923.

Benjamin Leader was commercially successful during his lifetime, and had exhibited approximately 216 paintings at the Royal Academy over 69 years from 1854 to 1923. His work can be seen in a number of museums including: Cincinnati Art Museum in Ohio (US), Tate Gallery and Victoria and Albert Museum in London, and other museums in Blackburn, Birmingham, Bristol, Liverpool, and Manchester (UK).