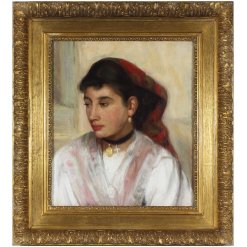 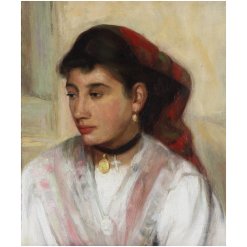 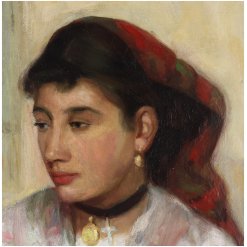 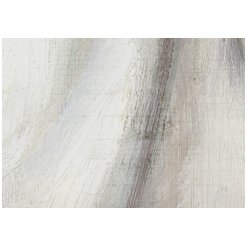 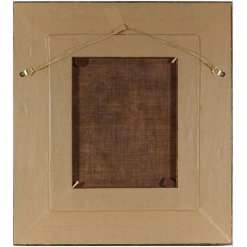 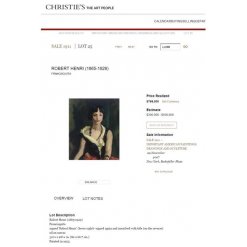 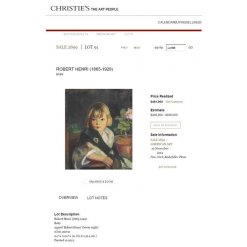 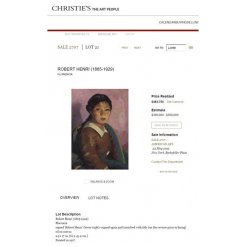 A captivating oil on canvas portrait painting of a young girl.  She is wearing a white blouse and a red and green headscarf.  Around her neck is a black choker with a cross and pendant.  She is deep in thought.

Works by Robert Henri frequently sell for very high prices at auction.  Some examples are included at the end of the photos.

Biography:  Robert Henri (1865 – 1929) was an American painter and teacher. He was a leading figure of the Ashcan School of American realism and an organizer of the group known as “The Eight,” a loose association of artists who protested the restrictive exhibition practices of the powerful, conservative National Academy of Design.
In 1886, Henri enrolled at the Pennsylvania Academy of the Fine Arts in Philadelphia, where he studied under Thomas Anshutz, a protégé of Thomas Eakins, and Thomas Hovenden. In 1888, he traveled to Paris to study at the Académie Julian, where he studied under the academic realist William-Adolphe Bouguereau, came to admire greatly the work of Francois Millet, and embraced Impressionism. He was admitted into the École des Beaux Arts. He visited Brittany and Italy during this period. At the end of 1891, he returned to Philadelphia, studying under Robert Vonnoh at the Pennsylvania Academy.

In Philadelphia, Henri began to attract a group of followers who met in his studio to discuss art and culture, including several illustrators for the Philadelphia Press who would become known as the “Philadelphia Four”: William Glackens, George Luks, Everett Shinn, and John Sloan.

By 1895, Henri had come to reconsider his earlier love of Impressionism, calling it a “new academicism.” He was urging his friends and protégés to create a new, more realistic art that would speak directly to their own time and experience. He believed that it was the right moment for American painters to seek out fresh, less genteel subjects in the modern American city. The paintings by Henri, Sloan, Glackens, Luks, Shinn, and others of their acquaintance that were inspired by this outlook eventually came to be called the Ashcan School of American art.
In 1898, Henri married Linda Craige. The couple spent the next two years on an extended honeymoon in France, during which time Henri prepared canvases to submit to the Salon. In 1899 he exhibited “Woman in Manteau” and  La Neige (“The Snow”), which was purchased by the French government for display in the Musée du Luxembourg.  Linda died in 1905.  Three years later, Henri remarried to Marjorie Organ.  Henri’s 1911 portrait of Marjorie, The Masquerade Dress, is one of his most famous paintings and hangs in the permanent collection of the Metropolitan Museum of Art.

In 1908, Henri was one of the organizers of a landmark show entitled “The Eight” (after the eight painters displaying their works) at the Macbeth Galleries in New York. Besides his own works and those produced by the “Philadelphia Four” (who had followed Henri to New York by this time), three other artists who painted in a different, less realistic style — Maurice Prendergast, Ernest Lawson, and Arthur B. Davies—were included. The exhibition was intended as a protest against the exhibition policies and narrowness of taste of the National Academy of Design.

Henri made several trips to Ireland’s western coast from 1913. Every spring and summer for the following years he would paint the children of Dooagh. Henri’s portraits of children, seen today as the most sentimental aspect of his body of work, were popular at the time and sold well. During the summers of 1916, 1917 and 1922, Henri went to Santa Fe, New Mexico to paint. He found that locale as inspirational as the countryside of Ireland had been. He became an important figure in the Santa Fe art scene and persuaded the director of the state art museum to adopt an open-door exhibition policy.

While travelling to the United States after visiting his summer home in Ireland in November 1928, Robert Henri suffered an attack of neuritis, which crippled his leg. He was hospitalized at St. Luke’s Hospital in New York. Gradually he became weaker, until he died of cardiac arrest early in the morning of July 12, 1929.