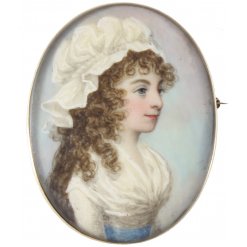 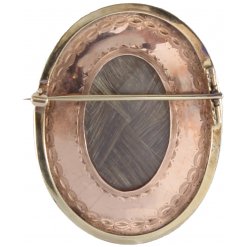 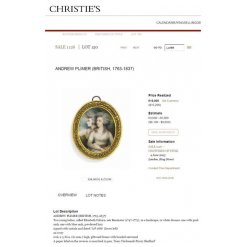 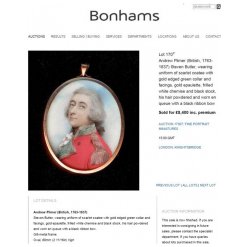 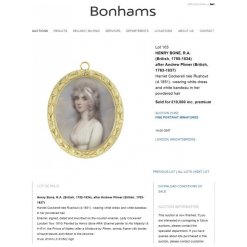 A finely painted watercolour miniature painting attributed to Andrew Plimer (1763-1837), of a young woman with long curly brown hair and wearing a white bonnet. A lock of her hair has been preserved within the frame and is visible on the reverse.

Some other examples of works by this artist and their sale by auction are included at the end of the photos.

Frame:  The miniature is glazed and set within an oval gold plated frame and has a brooch clasp.

Condition:  All in very good condition.

Biography:  Andrew Plimer (1763-1837) was one of the most distinctive miniaturists of the late 18th century. He was a prolific artist and much copied both during and after his lifetime. Andrew and his brother Nathaniel were the sons of a Shropshire clock maker. Having rejected their father’s trade, they ran away to London where in 1781 Andrew became a servant to Richard Cosway. Plimer assisted Cosway in his studio with the preparation of materials, and it is thought that Cosway recognised Plimer’s artistic potential and gave him lessons.

In 1785 Plimer left Cosway to set up on his own and quickly established himself. He exhibited at the Royal Academy from 1786-1830 and built up close connections with some of the leading miniaturists of the day. Through close observation of their techniques, Plimer was able to develop his own distinctive style. He spent most of his career in London where he built up a successful reputation as a society miniaturist.