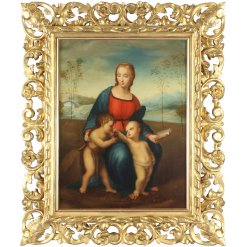 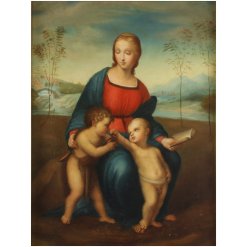 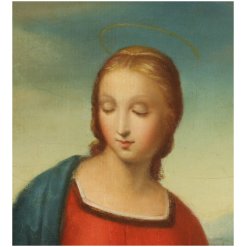 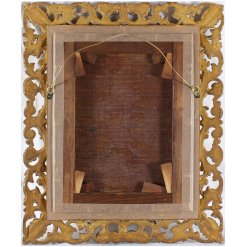 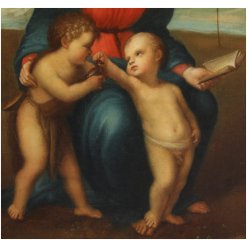 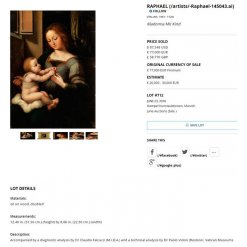 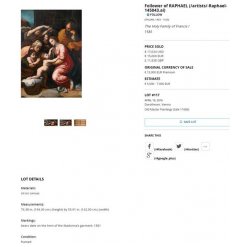 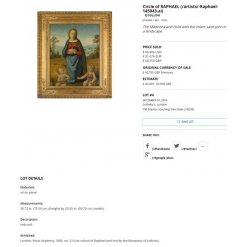 AFTER RAPHAEL
“Madonna of the Goldfinch”

The “Madonna del cardellino” or “Madonna of the Goldfinch” is a painting by the Italian renaissance artist Raphael, from c. 1505-1506. A 10-year restoration process was completed in 2008, after which the painting was returned to its home at the Uffizi in Florence. During the restoration, an antique copy replaced the painting in the gallery.

In this painting, as in most of the Madonnas of his Florentine period, Raphael arranged the three figures – Mary, Christ and the young John the Baptist – to fit into a geometrical design. Though the positions of the three bodies are natural, together they form an almost regular triangle. The Madonna is shown young and beautiful, as with Raphael’s various other Madonnas. She is also clothed in red and blue, also typical, for red signifies the passion of Christ and blue was used to signify the church. Christ and John are still very young, only babies. John holds a goldfinch in his hand, and Christ is reaching out to touch it. The background is one typical of Raphael. The natural setting is diverse and yet all calmly frames the central subject taking place.

In Madonna Del Cardellino, the goldfinch represents Christ’s crucifixion. The reason for its association comes from the legend that its red spot was born at the time of the crucifixion. It flew down over the head of Christ and was taking a thorn from His crown, when it was splashed with the drop of His blood. The book in Mary’s hand reads Sedes Sapientiae or “The Throne of Wisdom.” This term usually is applied to images in which Mary is seated upon a throne, with Jesus on her lap, but in this case, the inscription implies the rock on which Mary sits is her natural throne.

Some other examples are included at the end of the photos.

Condition:  Painting and frame are both in good condition. There is some craquelure commensurate with age and the back of the canvas has a some stage been waxed.

Biography:  Raphael is considered to be a “master” of the High Renaissance, a title he shares with Michelangelo and Leonardo da Vinci. He was born in 1483 and died in 1520, living a mere thirty-seven years. Despite his relatively short lifespan, he was highly influential throughout his time on earth. He produced a vast quantity of work in a variety of media. He was active in architecture, printmaking, painting, and drawing. During the first half of his career, he spent years traveling across Northern Italy and was influenced by the Florentine styles he saw there, causing this stage to be called his Florentine Period. After which, in 1508, he moved to Rome where he continued to work.

Many of his commissions came from the Vatican, including the Apostolic Palace, which brought about one of his most famous works, School of Athens. Due to his relationship with the church, he and Michelangelo were fierce rivals throughout both of their careers, and often competed for the same commissions. During his Florentine period, this work, The Madonna Del Cardellino, was painted during this period, along with several other well-known Madonnas: The Madonna of the Meadow and La Belle Jardinière. All three share several characteristics: Madonna is clothed in red and blue, the same three subjects are painted, the pyramidal composition, the natural background, and the connection to the church through the representation of books, crosses, or, indeed, the goldfinch.