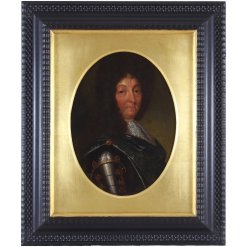 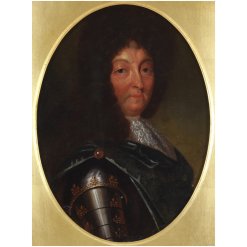 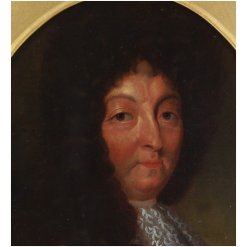 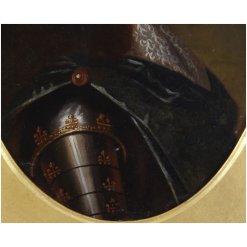 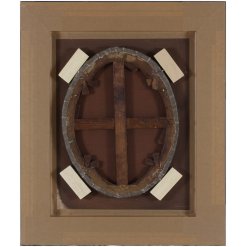 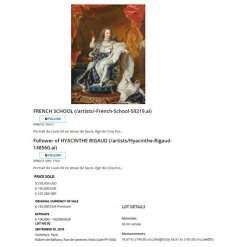 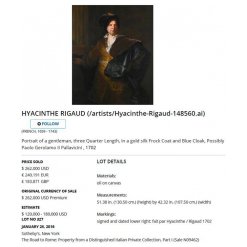 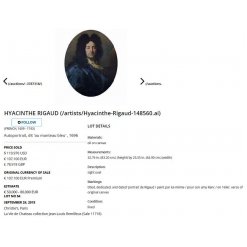 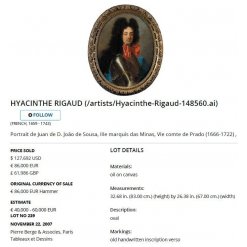 A well painted oval oil on canvas portrait painting of King Louis XIV (the Sun King).  Some examples of works by Hyacinthe Rigaud are included at the end of the photos.

Louis XIV (1638-1715), known as Louis the God-Given, Louis the Great or the Sun King, was a monarch of the House of Bourbon who reigned as King of France from 1643 until his death in 1715. Starting at the age of 4, his reign of 72 years and 110 days is the longest recorded of any monarch of a sovereign country in European history. In the age of absolutism in Europe, Louis XIV’s France was a leader in the growing centralization of power.

Louis began his personal rule of France in 1661, after the death of his chief minister, the Italian Cardinal Mazarin. An adherent of the concept of the divine right of kings, which advocates the divine origin of monarchical rule, Louis continued his predecessors’ work of creating a centralized state governed from the capital. He sought to eliminate the remnants of feudalism persisting in parts of France and, by compelling many members of the nobility to inhabit his lavish Palace of Versailles, succeeded in pacifying the aristocracy, many members of which had participated in the Fronde rebellion during Louis’ minority. By these means he became one of the most powerful French monarchs and consolidated a system of absolute monarchical rule in France that endured until the French Revolution.

Under his rule, the Edict of Nantes, which granted rights to Huguenots, was abolished. The revocation effectively forced Huguenots to emigrate or convert in a wave of dragonnades, which managed to virtually destroy the French Protestant minority.

During Louis’ reign, France was the leading European power, and it fought three major wars: the Franco-Dutch War, the War of the League of Augsburg, and the War of the Spanish Succession. There were also two lesser conflicts: the War of Devolution and the War of the Reunions. Warfare defined the foreign policy of Louis XIV, and his personality shaped his approach. Impelled “by a mix of commerce, revenge, and pique”, Louis sensed that warfare was the ideal way to enhance his glory. In peacetime he concentrated on preparing for the next war. He taught his diplomats that their job was to create tactical and strategic advantages for the French military.

Frame:  Presented in a later brown wooden frame with a gilt spandrel.

Hyacinthe Rigaud Biography:  Hyacinthe Rigaud (1659-1743) was born in Perpignan (Pyrénées-Orientales), the grandson of painter-gilders from Roussillon and the elder brother of another painter (Gaspard). He was trained in tailoring in his father’s workshop but perfected his skills as a painter under Antoine Ranc at Montpellier from 1671 onwards, before moving to Lyon four years later. It was in these cities that he became familiar with Flemish, Dutch and Italian painting, particularly that of Rubens, Van Dyck, Rembrandt and Titian, whose works he later collected. Arriving in Paris in 1681, he won the prix de Rome in 1682, but on the advice of Charles Le Brun did not make the trip to Rome to which this entitled him. Received into the Académie royale de peinture et de sculpture in 1700, he rose to the top of this institution before retiring from it in 1735.

Since Rigaud’s paintings captured very exact likenesses along with the subject’s costumes and background details, his paintings are considered precise records of contemporary fashions.