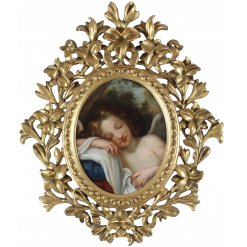 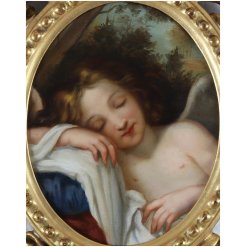 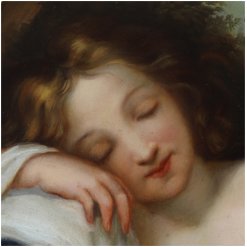 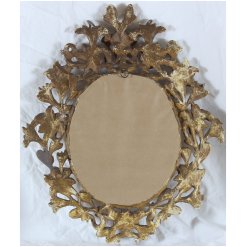 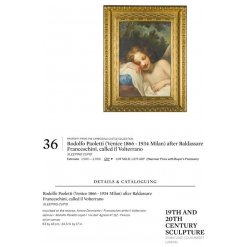 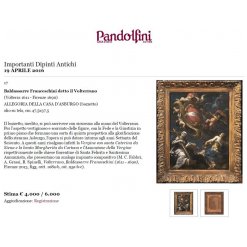 A well painted antique oil on panel portrait painting of cupid asleep.  This is after the original painting by Baldassare Franceschini which is in the Galleria Palatina in Florence.

Some similar examples are included at the end of the photos.

At an early age, he worked as an assistant to his father, a sculptor, and then studied with the Volterran artist Cosimo Daddi. This employment did not make full use of his talents, so the Marquese Inghirami placed him, at the age of sixteen, under the Florentine painter Matteo Rosselli. Both Francesco Furini and Lorenzo Lippi also trained with Rosselli. Within a year, he had advanced sufficiently to execute frescoes in Volterra with skilled foreshortening, followed by work for the Medici family in the Villa Petraia.

In 1652, the Marchese Filippo Niccolini, planning to employ Franceschini on the frescoes for the cupola and back-wall of his chapel in Santa Croce, Florence, dispatched him to various parts of Italy to improve his style. The painter, in a tour that lasted some months, took a serious interest in the schools of Parma and Bologna, and, to some extent, in the Romano-Tuscan style of Pietro da Cortona, whose acquaintance he made in Rome. He then undertook the paintings commissioned by Niccolini. These are his best works and the most well-known.

He painted a scene of Elias sleeping for a wooden polyptych in the church of San Giusto in Volterra. He painted frescoes celebrating the Medici ancestry for the inner court of the Villa Petraia. The influence of his decorative style on Volterrano’s work at the Villa Petraia is clear. They include a painting of the hunchbacked court jester. Among his best oil paintings on a large scale is the St. John the Evangelist in the church of St. Chiara at Volterra. One of his latest works is the fresco in the cupola of the Annunziata, Florence, which occupied him for two years towards 1683.

Franceschini died of apoplexy at Volterra on 6 January 1689.